Marquette Park in Chicago’s southwest side is an idyllic place for a Convoy of Hope signature event. Verdant rolling hills, hundreds of shade trees, swaths of green, well-tended baseball fields, a nine-hole golf course and an expansive lagoon serve as respite for moms pushing strollers, grade-schoolers looking for adventure and grandparents bent on keeping their grandkids engaged with nature, rather than video games or with what the surrounding city streets may offer.

But the park — one of the biggest in Chicago, at 323 acres — is also hub to one of the most violent areas of the city. Recent media headlines reflect this:

“Many of the residents here want their neighborhoods to change for the better,” says Steve Pulis, signature event director for Convoy of Hope. “They want peace and hope, rather than violence and crime.”

Christian Life Missions has partnered with Convoy of Hope to provide free Bibles to those in need at Convoy of Hopes community events. These events provide free groceries, health and dental screenings, haircuts, family portraits, hot meals, career service training and much more to the working poor.

In the following story, you’ll meet some of the 1,900-plus volunteers and 10,000- plus guests of honor who gathered at the park. The help and hope they received is possible because of friends like you.

Larry Delaney sits on a metal folding chair under a shade tree. He sips coffee and tells of his love for his family, the setbacks they’ve endured, and life in one of Chicago’s toughest neighborhoods. “

We brought our kids to the park to get school supplies,” he says, noting his sons are in line for overdue haircuts. “I can’t just go out and spend 30 bucks when the boys need haircuts, so this is a big help.”

Optimism During Uncertainty Like other guests of honor, Delaney and his family had access to health services such as vaccinations, blood pressure and diabetes screenings, and dental check-ups. As they made their way through the site they received lunch, bags of groceries and even a pair of shoes for each son.

“Now I can focus on getting them boots for winter,” says Larry, glancing at bags holding the new shoes his sons received. He pauses as if envisioning the cold winter months ahead.

When asked what the event means to the community, he gets philosophical.

“It’s almost like the segregation between the races is gone,” he says. “Everybody will take a little hope with them when they leave today.” 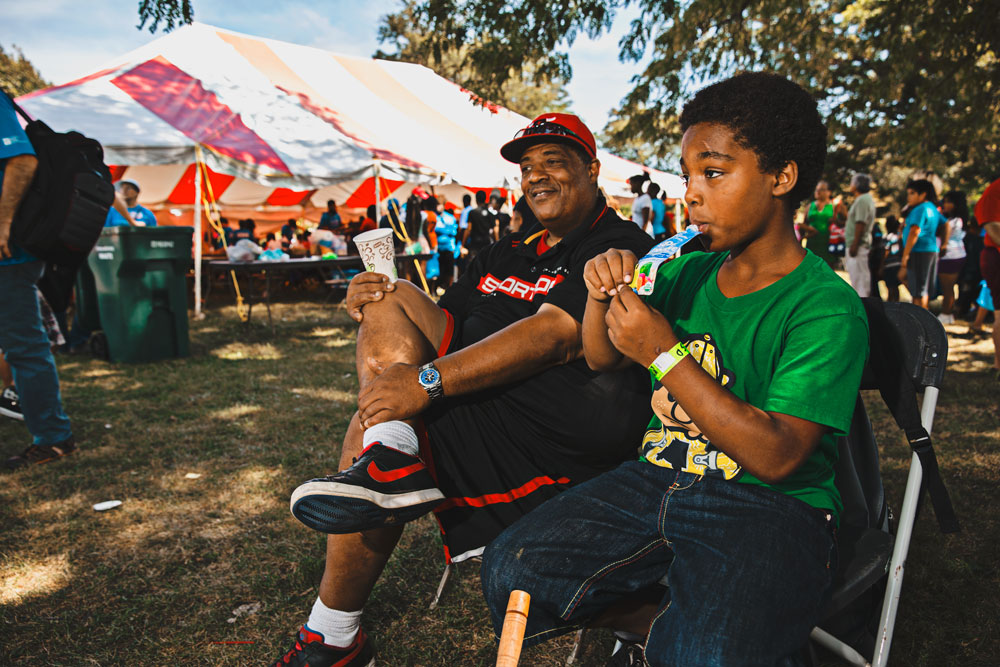 Larry Delaney and his son relax in the shade at the event.

“Just giving out food isn’t enough,” says Jillian, a dietician, as she interacts with the guests as they enter the tent. “Talking to and educating people is what works.”

Plum was founded with the mission to get the very best food from the very first bite to all little ones.

“We firmly believe that when little ones receive the right nutrients, they can live to their full potential and have their full effect on the world,” says Victoria Fiore, head of Missions at Plum Organics. “Our partnership with Convoy of Hope helps us deliver on our mission.”

And it seems to be working. Just outside the tent’s exit, 11-year-old Leighton sips a Super Smoothie. “I love this stuff,” he says. “It’s so good!”

Living in a Dangerous Place

Long lines in the Kids Zone are present as children angle to get another session in the bounce houses. Marquita, a thirty-something mother with a teenager and two grade-schoolers swarming at her legs, doesn’t hesitate when asked what she worries about.

“The gun violence,” she says, before looking at her children. “As we walk down the street, I’m always thinking, ‘Are we gonna be the next ones [shot]?’” Marquita has reason to be concerned: In the first five months of the year, 161 people were murdered throughout the city.

Marquita wants better for her family and is thankful Convoy of Hope is present on this day. According to Marquita, the community event has brought an uncommon peace to the neighborhood and she’s happy to see families from different neighborhoods interacting.

“Don’t stop doing these events,” she says. “These are what our communities need. They’re an inspiration to our youth and they really give us something to look forward to.” 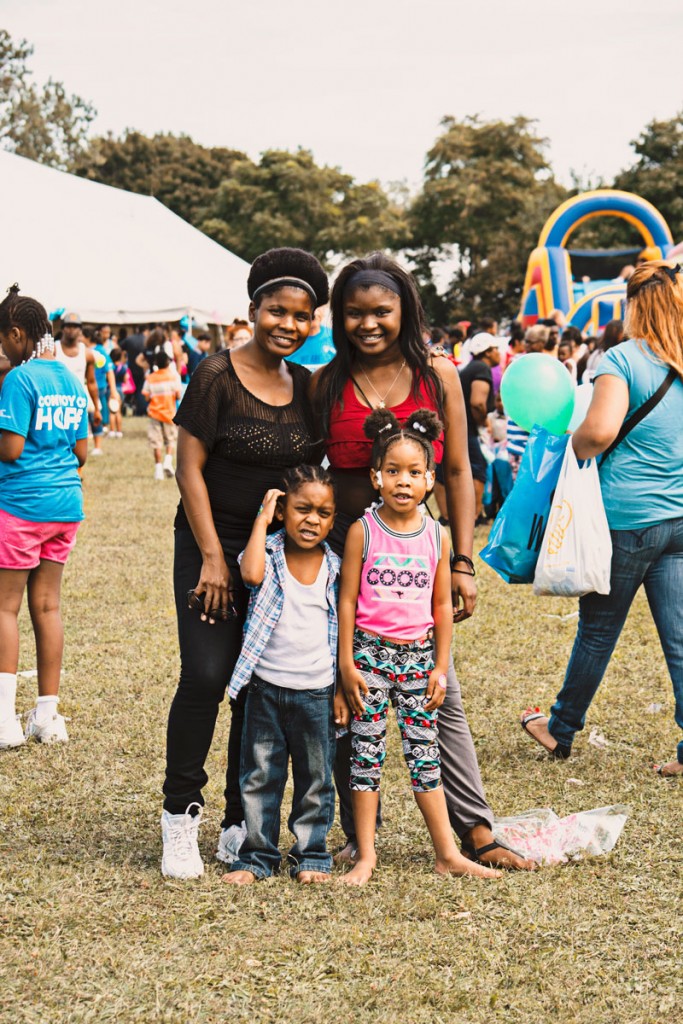 Marquita and her three children were excited about the services and supplies at the event.

Lisa, a 51-year-old breast cancer survivor wearing a brightly colored “Breast Cancer Survivor” t-shirt, beams as she is greeted at the National Breast Cancer Foundation, Inc.® tent by representatives and volunteers. Her smile is one of resilience, determination and gratitude — all honed during her battle with cancer.

Lisa relied on her friends, family and support groups to get her through the difficult times. She started chemotherapy and radiation and in late 2012 received the best news she could receive — she was cancer-free.

“Through Convoy of Hope, we have access to communities with an underserved population,” says Samantha Moon, programs coordinator for NBCF. “That population is at a higher risk for late-stage breast cancer because they don’t have access to early detection services.”

When asked how it felt when she heard those words come from her doctor, Lisa took a deep breath then slowly exhaled. Her body seemed to slip into a peaceful stance. “Joy,” she said as her eyes filled with tears.

Later in the day, more tears fell under the NBCF tent — but this time from a volunteer. Stacey, age 46, was decked out in all her breast cancer awareness accessories as a way to honor her late mother, who lost her battle with breast cancer in 2010.

“I hope she’s proud of me,” Stacey says of her mother, noting that the NBCF tent is important for women because of the early detection education and support services they offer. Throughout the day, Stacey could be heard encouraging other women to be aware and know their bodies so that they can take control of their health — a key talking point passed onto each woman who comes through the tent.

“It means a lot to me that these resources exist,” says Stacey of the education and services offered by NBCF. “Being aware saves mothers and daughters, and if I can help one person with my story — it’s worth it.” 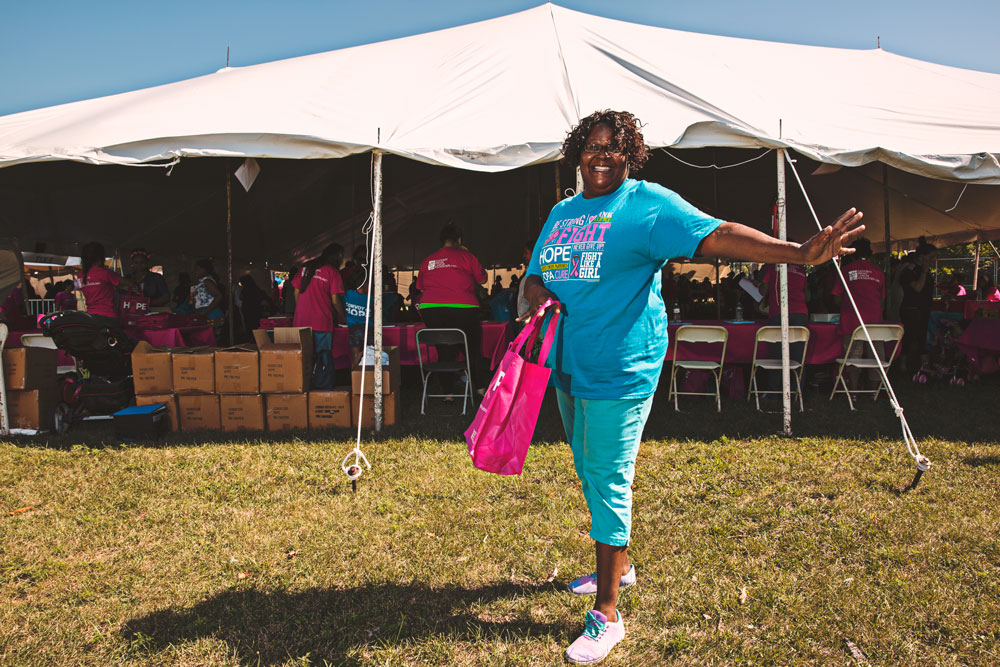 On a neat row of plastic chairs under the big top of the shoe tent, several children are being fitted with TOMS shoes. Standing nearby, with shoes in hand, is Sophia, a mother of one of the children.

“It’s challenging to feed our kids and clothe them,” she admits. “The fact that Convoy is here giving shoes and back-toschool supplies, well, I really appreciate that.”

She could be talking for any number of guests of honor on this day who struggle to put food on the table and clothe their children. In less than a minute Sophia rattles off all the services and products she’s received at the event by counting them on her fingers.

When asked what she would tell Convoy of Hope supporters, she smiles broadly and says: “Continue to keep up the good work, it’s impacting lives in a good way.”

Original story from Molly Erickson of Convoy of Hope.

Help Us Give Away Free Bibles & Change Someone’s Life